In line with the strategy to increase presence in OECD countries

Repsol E&P USA Inc. ("Repsol") is pleased to announce an exploration joint venture with 70 & 148 LLC (“70”) and GMT Exploration LLC (“GMT”) on the North Slope of Alaska. Terms of the join t venture involve Repsol agreeing to a broad-reaching exploration and development program on leasehold held by 70 and GMT, with Repsol and 70 collaborating on all aspects of the program, Repsol's working interest after this transaction will be 70%.

The blocks are located close to large producing fields and cover an area of 2,000 square kilometers. Repsol has agreed to carry out the investment necessary to explore and evaluate the economic viability of the resources contained in these blocks.

The estimated minimum exposure of this investment for Repsol, including amounts to be paid to its partners and the cost of exploration to be carried out over several years, amounts to $768 million. The start of exploratory work is scheduled for next winter.

The North Slope of Alaska is an especially promising area for Repsol as it has already shown to be oil-rich and carries low exploratory risk. This acreage also helps increase the company’s presence in OECD countries. In the United States, Repsol has already successfully explored for and developed hydrocarbons production in the Gulf of Mexico.

Repsol has significantly boosted its onshore and offshore exploration activities in the last five years, resulting in some of the world’s largest oil and gas discoveries. Repsol’s upstream unit in 2010 posted a record reserve replacement ratio of 131% and incorporated resources that have significantly boosted the company’s future prospects.

“This deal is a perfect fit in our efforts to balance our exploration portfolio with lower risk, onshore oil opportunities in a stable environment. We are confident that our worldwide experience combined with a partner with an extensive local knowledge is going to deliver value in the near future,” said Repsol Chairman Antonio Brufau.

“70” (an affiliate of Armstrong Oil & Gas Inc.) and GMT, are two privately held exploration companies based in Denver, Colorado, The two companies have been active successful explorers on the North Slope together for the last decade. They are currently two of the largest lease holders in the state with ongoing activities on the North Slope and in the Cook Inlet. Tudor Pickering and Holt, a Houston based energy investment bank, acted as advisor to 70 and GMT on this transaction. 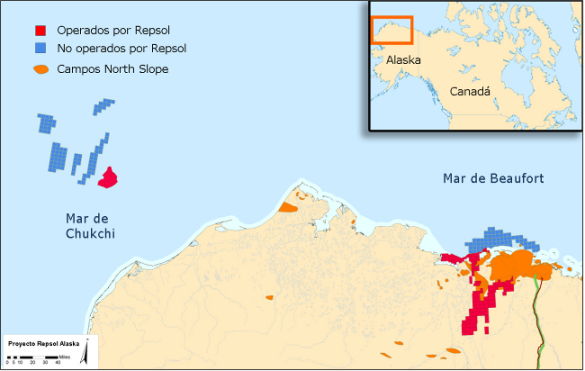